What's In A Name?

When, at last, we found a landlord willing to let us turn his house into a restaurant, and a contractor to transform our very small budget ($12,000) into a dining spot, we asked Bernice Vincent to translate our theme -- Antoine de Saint-Exupéry's book, Le Petit Prince (The Little Prince) -- into some design elements like the signs, a letterhead, and a business card.

We settled for a simple, rustic "early Canadian" décor with antique pine furniture, hand-woven drapes, hardwood flooring in the dining-room, and lots of copper in the kitchen -- including the fabulous copper hood that you can see in the photo, above.

When I see photos of today's pretentious setting, I wonder why they chose to revert to the original name of Auberge du Petit Prince, which Robin and I had adopted because we both liked the childlike image that it conveyed. As you can see from our card -- the only remaining vestige of those early days -- we had tried to evoke the Saint-Exupéry story in our décor and style -- whereas this new grandiose place really has nothing to do with that small imaginary prince.

Although he was a count, Antoine de Saint-Exupéry was first and foremost an aviator who had studied art, and the fact that he drew all the pictures in The Little Prince himself tells me that he would hardly approve of that fancy setting either.

I particularly loved our sign, which Bernice Vincent had designed and her (late) husband Don had built: it represented the Little Prince's planet, reshaped into an oval, with a volcano topped by a frying pan at the top, similar to our business card. It hung from the roof of the terrace. At Christmastime the first year, we had attached a string of tiny white lights around the sign, and it looked so good that way -- even more reminiscent of the Little Prince's planet -- that we had left the lights there permanently.

Now I wish I'd taken that sign with me when I left. Or that at least someone had taken photos of all those nice creative Bernice Vincent touches, including the "Open" and "Closed" signs ("Open" was stolen by a customer, whom I have never forgiven) and even the sign on the office door.

Beside that one beat-up business card, all I have left is that checkered pink and white tablecloth from the terrace (below), which I had taken away because it had a small hole in it. It's now forty years old, and I still use it. 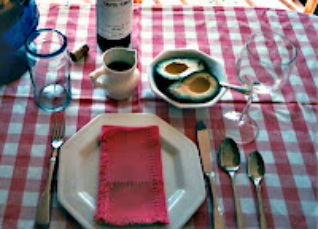